Symptom finder - The causes of pyrexia of unknown origin 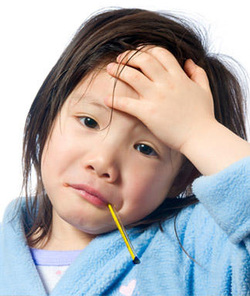 Symptom finder- The causes of pyrexia of unknown origin

Pyrexia of unknown origin is a prolonged fever which is still undetermined after performing a complete history intake and clinical examination.

The common causes of pyrexia of unknown origins are neoplasia such as acute leukemia, hepatoma, lymphoma and hypernephroma, viral infection such as cytomegalovirus, HIV, glandular fever and influenza, bacterial infection such as cat scratch disease. Q fever, leptospirosis, typhoid, brucellosis, tuberculosis, subacute bacterial endocarditis and pelvic abscess as well as subphrenic abscess, protozoal infection such as toxoplasmosis, amebiasis and malaria which is common in africa, fungal infection such as pneumocystis jiroveci, aspergillosis and candidiasis, granulomatous disease such as sarcoidosis and Crohn’s disease and connective tissue disorder such as temporal arteritis, vasculitis, polyarteritis nodosa, systemic lupus erythematosus and rheumatoid arthritis.

Pyrexia of unknown origin is differ from pyrexia of clearly defined illness such as viral infection ( colds), acute appendicitis and acute pyelonephritis.

The history should focus on any rashes, abrasion, diarrhea, bites, contact with animals, contact with infection and travel abroad. Look for any evidence of drug abuse or non prescription drugs intake. Asked the patient, regarding any symptoms of general malaise, fatigue, weight loss and night sweat. Observe the patient current immunization status and current surgery performed such as abdominal surgery.

Full examination should be performed as clinical signs of pyrexia of unknown origin are non specific and fluctuate in terms of chronicity and severity. Look for any evidence of hepatosplenomegaly and lymphadenopathy.

Empirical treatment is considered in cases which are suggestive of temporal arteritis, suggestive of cryptic disseminated tuberculosis or culture negative endocarditis. It is also advisable to hold drugs to see any settles of the temperatures.

Full blood count may reveal raised white cell count due to leukemia and infection. Viral infection is associated with raised lymphocytes count. Anemia of chronic disease ( rheumatoid arthritis ) and malignancy are presented with low hemoglobin level. Urea and electrolytes are useful in detecting any kidney affected connective tissue disease. ESR is elevated in tuberculosis, connective tissue disorder and malignancy. Liver function test may be useful in detecting any liver disease or biliary tract disease such as hepatitis and cholangitis. Blood culture may reveal the present of streptococcus viridians in case of infective endocarditis . Intra abdominal sepsis is suggestive by isolation of coliforms. Blood glucose may reveal the present of diabetes. Microscopy, culture and sensitivity for tubercle bacilli in the sputum culture is detected. Viral antibodies for cytomegalovirus, HIV, infectious mononucleosis, hepatitis C and hepatitis B.Urine microscopy and culture may reveal proteinuria which is suggestive of renal disease, hematuria which is suggestive of blood dyscrasia and hypernephroma. Microscopic hematuria is suggestive of endocarditis. Granular cell cast or red cell cast in the urine is suggestive of inflammation of the renal ( connective tissue disorder). 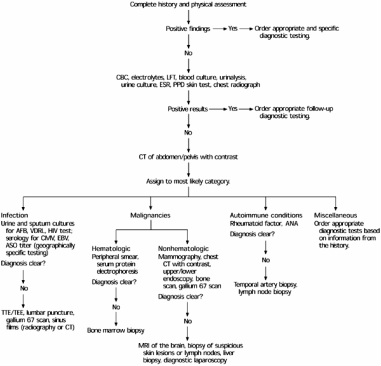 ECG is useful for detection of any cardiac disease. Chest X ray may reveal evidence of lymphoma and tuberculosis,enlargement of the hilar glands due to sarcoidosis, pneumonitis due to pneumocystis jiroveci or HIV. Atypical pneumonia is also detected with chest x ray . Stool microscopy may reveal the present of cysts, parasites and ova. Culture and sensitivity of the stool are considered. The present of myeloma and leukemia are detected by bone marrow aspirates. Intra abdominal sepsis is excluded by performing exploratory laparotomy.

CT scan is useful to exclude malignancy and infection. Lumbar puncture may reveal the present of protein in the CSF due to Guillain Barre syndrome, the present of blood in the CSF due to subarachnoid hemorrhage and white cell and organisms in CSF due to meningitis. Mantoux test is useful to exclude tuberculosis. Leptospirosis , brucellosis and Q fever are detected with serological testing. Renal biopsy may rule out any malignancy or glomerular disease. Localized abscess and localized infection are detected with white labelled scan. Rheumatic fever is detected with antistreptolysin O titer. Autoantibodies test are useful for connective tissue disorders. Muscle biopsy is useful for detection of myositis. Localized infection is detected with Gallium scan. Hepatitis is identified with liver biopsy and intra peritoneal abscess is detected with ultrasound.