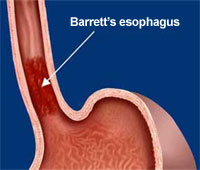 Patient with Barrett esophagus may complain of symptoms such as heartburn , belching and regurgitation after meals. Patient also complain retrosternal heartburn and difficulty in swallowing or dysphagia.

Pathologically, the normal squamous epithelium lining of the esophagus is being replaced with metaplastic columnar epithelium. The columnar cells may present as hyperchromatic and enlarged nuclei which is a common sign of dysplasia. Goblet cells and mucosal glands may also present with the metaplastic columnar epithelium. Endoscopy study may reveal a circumferential and tongue like projection of orange,gastric type epithelium from the stomach into distal tubular esophagus.