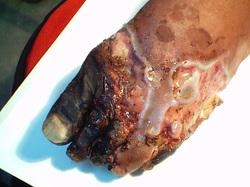 Buerger disease is common in men and the treatment usually focus on cessation of smoking or prevention of vasospasm by sympathectomy. Hispathologically there will be acute and chronic inflammatory infiltrate , formation of granulomatous lesion, microabscess, transmural inflammation and thrombosis of the vascular lumen.