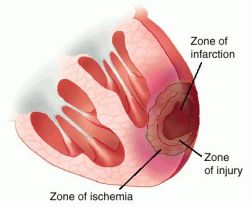 Pathologically during the the first 3 - 12 hours there will be edema and hemorrhage as well as wavy fibers of the myocardium. 12- 36 hours later may present with infiltration of the neutrophil, coagulative necrosis and muscle hypereosinophilia. Granulation tissue formation, phagocytosis of the dead cells and infiltration of macrophages are commonly present during the 5 - 10 days. 2 months later scar tissue will be formed.