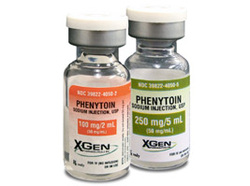 Phenytoin may affect other drugs due to its ability to induce cytochrome P450. Phenytoin may lead to an increase in the metabolism of few drugs such as cyclosporine, warfarin and oral contraceptive pills.

Phenytoin may reduce the depolarization of the neuron by decreasing the flow of the calcium ion and sodium ions across the cell membrane of the neuron.