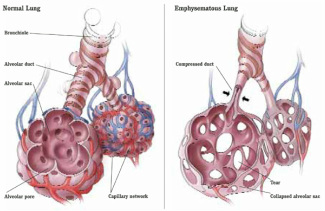 Emphysema may occur due to deficiency of the alpha 1 antitrypsin ( hereditary condition) and smoking.Smoking will inactivate the action of alpha 1 anti trypsin which is protective in nature and attract neutrophils. There will be decreased in the FEV1/ FVC ratio, ( FEV1= forced expiratory volume in 1 second and FVC = forced vital capacity). There will also be increase in the total lung capacity and residual volumes.

Patient is treated with bronchodilators, oxyygen and advice on smoking cessation. The complication of emphysema may include pneumothorax, respiratory failure and cor pulmonale.