Emergency Strategy - How to clean an open wound 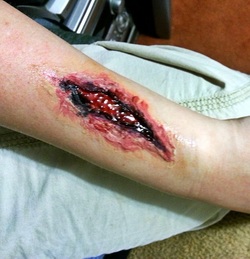 Emergency Strategy - How to clean an open wound

The initial steps include the assessment of the patient ‘s airway, breathing, circulation,disability and exposure. In case of open wound we also need to focus on other factors such as the present of open fractures, loss of tissue, contamination, damage to the nerve, vascular or rupture of the tendon, compartment syndrome and depth of the wound and area of the wound. The next step is to consider photographing the sites of the wound. Any gross contamination need to be removed by forceps. The sizes of the wound is identified by using the ruler.

The wound need to be cleaned with copious amount of normal saline irrigation ( avoiding high pressure irrigation as it may push the debris further)from the central outward to prevent further contamination. The wound also can be cleaned using the antiseptic.  The joints need to be moved at the sites above and below the sites of injury with the aim to not miss any injuries to the tendon which can be easily missed in cases of the wound which incurred in different position. This happen in clinched fist injury.

The dead tissue need to be cut. Forceps and wound retraction is useful to monitor and examine the area of the wounds. Any damage to the tendons, nerves and wound will require further evaluation. These includes, rupture of the tendons, open fractures of the joints, compromise of the vascular system and injury to the nerve.

Besides, photography and visual assessment, x ray is also important as well as deep palpation in identifying contaminants ( glass or metal) and other injuries to the tissue that may be missed.

The swabs of the wound can be taken for microbiological studies.

Any cavity may present as a result of the wound and this cavity need to be drained. There are two options either using a wick ( emergency setting) or using the drain.

Insertion of the drain may involve identification of the dependent part of the wound cavity. the depth of the tract is identified by using artery forceps. In case of deep tract of the wound, the wound will require to be extended into the skin above the sites of the wound to allow the drainage to be performed effectively.

The wound need to be dressed with a non stick dressing over the edges of the wound and the wound itself. besides dressing, bandage , tap and gauge is also needed. 48 - 96 hours later , wound inspection and debridement may be required. However, it will be earlier in case of wound contamination.

The common complication of wound cleaning include infection. Contaminated wounds should not be sutured close due to risk of infection which require further drainage.Bleeding, scar and further treatment/ surgical procedure may happen as part of the complication.