Coma
In a patient presenting with coma, the physician begins the examination by looking for bruises (signifying a head injury), fractures (also signifying a head injury or fat embolism), and tongue lacerations (suggesting epilepsy). Smell the breath for evidence of alcohol intoxication, diabetic acidosis (a sweet odor), or organophosphate intoxication (garlic odor). Obviously, the vital signs may indicate the cause such as significant hypertension (hypertensive encephalopathy), rapid, irregular pulse (atrial fibrillation and a cerebral embolism), or fever (meningitis or other infectious disease).
In addition, it is necessary to do the following:
Check the pupils. If both are constricted, consider narcotic intoxication or a pontine hemorrhage. If both are dilated, the patient
may have some other form of drug intoxication. A unilateral dilated pupil suggests a ruptured cerebral aneurysm or herniation from a
space-occupying lesion (hematoma, abscess, or tumor).
Check for nuchal rigidity. If this is present, the patient probably has meningitis or subarachnoid hemorrhage. One should not neglect to
perform a funduscopic examination because it may show papilledema (indicating a space-occupying lesion or hypertensive
encephalopathy) or hemorrhages (suggesting a ruptured cerebral aneurysm or diabetic coma).
Do not forget to check the skin for petechiae (suggesting subacute bacterial endocarditis) or ecchymosis (suggesting meningococcemia
or trauma).
Be alert for cherry red lips, a clear sign of carbon monoxide poisoning. Needle tracts are a tip-off for heroin addiction and a
possible overdose. Listen for murmurs (suggesting the possibility of subacute bacterial endocarditis) and cardiac arrhythmias (atrial
fibrillation with a cerebral embolism or Stokes–Adams syncope).
Finally, conduct a neurologic examination to determine if there are focal neurologic signs to suggest a space-occupying lesion or stroke (embolism, thrombosis, or hemorrhage). If there is resistance to eye opening, consider the possibility of malingering. The author had a
case like this when he was a resident. Shortly after he began talking to the patient as if the man was not in a coma, he “woke up.” 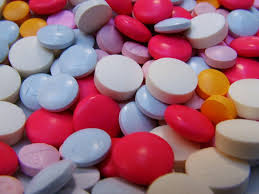