Acute respiratory distress syndrome also known as acute lung injury consists of non cardiogenic pulmonary edema, acute respiratory failure, refractory hypoxemia and reduced lung compliance.
It happens due to the insult to the lungs or other organs which causes the release of neutrophil inflammatory mediators. These will increase the capillary permeability and cause pulmonary edema.

On examination, patients manifested signs of cyanosis, tachycardia, tachypnea, widespread inspiratory crepitation ( bilateral but asymmetrical in the early stages). There will be hypoxia refractory to oxygen treatment.

The early exudative phase presented with edema in the alveolar space and the interstitium is filled with inflammatory infiltrates.

The alveolar exudates undergoes organization in fibroproliferative phase with proliferation of type II pneumocytes and collagens’ production by the fibroblasts.

3-4 weeks later, it reaches the final stage of fibrotic phase. In this phase, the honeycomb appearance exists due to the coalescent of the alveoli. The fibrosis’ resolution is low.

Acute respiratory distress syndrome should be managed in intensive therapy unit. 40% - 60% of oxygen is given via CPAP or mechanical ventilatory support. CPAP will prevent the collapse of  the alveolar while mechanical ventilator will support patients who are too weak to breath by themselves.

If partial pressure of oxygen is less than 8kPa despite oxygen given or partial pressure of carbon dioxide is more than 6 kPa, the patients need to be intubated and given intermittent positive pressure ventilation at a set tidal volume and rates. Alveolar collapse is prevented via positive end expiratory pressure.

Inverse ratio ventilation will ensure longer inspiratory phase than expiratory phase. It is achieved by setting the tidal volume at a lower pressure with a longer period of delivery.

Steroid is useful in treating proliferative phase. The cardiac output is maintained by using dobutamine which is an inotrope.in cases of anemia, blood transfusion is conducted.

The underlying causes of acute respiratory distress syndrome are treated. For instance, blood transfusion for shock and antibiotics for sepsis.

Pulmonary edema is treated with diuretics, fluid restriction and inhaled nitric oxide. Diuretics will maintain the urine output while nitric oxide acting as pulmonary vasodilator. In cases of renal failure, hemofiltration is considered.

Respiratory failure and death are the complications of acute respiratory distress syndrome.

The complications of the positive end expiratory pressure are microvascular damage due to high oxygen pressure and concentrations, over distention of the lungs and compression of the pulmonary vessel which causes reduction in venous return and cardiac output.

The prognosis depends on the causes but mostly poor. There will be prolonged period of ventilation and long convalescence. 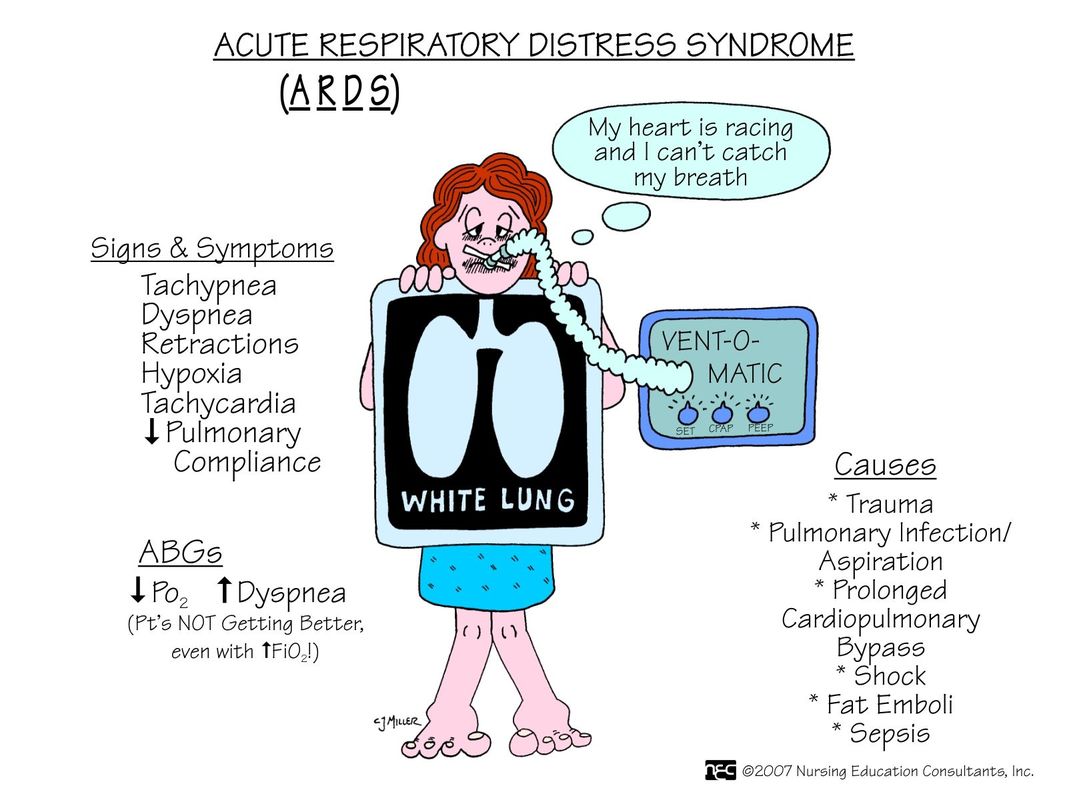