Pathology definition - Polyps of the colon 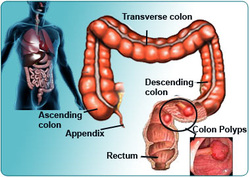 Polyps of the colon

There are a few polyps on the colon. The polyps can be further divided into tubular adenoma, tubulovillous adenoma and villous adenoma.

The polyps are adenomatous in characteristic. The adenomatous commonly affecting individual age 50 and above. There is usually a strong family predisposition with mutation on the chromosome 5 which coded for tumor suppressor gene. However the intake of NSAIDS and aspirin may reduce the incidence of developing adenomatous polyps and colorectal adenocarcinoma.

Polyps of the colon may be asymptomatic in most cases. However, patient may present with rectal bleeding which finally lead to an iron deficiency anemia.

15% of adenomatous polyps are tubulovillous adenoma which is tubular adenoma with the surface covered by finger like projection/villi.

10% of adenomatous polyps are villous adenoma. Villus adenoma mostly present as broad based polyps/sessile polyps which are found in the rectum and sigmoid colon. Villous adenoma is characterized by finger like projection/villi which has a dysplastic columnar epithelium. Villous adenoma carries a high risk of developing colorectal adenocarcinoma.


The treatment may include removal of the polyps by surgical resection of the lesion which is done by using colonoscopy.