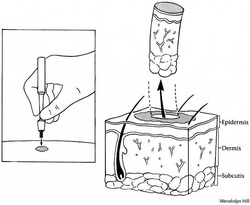 The first step is to get the consent from patient after taking the whole history and perform a clinical examination and evaluation of the patient’s well being and the lesions.

Before starting the procedure, make sure that the patient does not present with any condition that may contraindicate punch skin biopsy.

e.g Punch skin biopsy is avoided in patient with bleeding and clotting abnormalities. Patient with INR less than 3 and platelet count less than 5 x 10*9 per liter.

Make sure that you get all the equipment require such as  sterile gloves, skin marker, sterile drapes,alcohol,  punch biopsy implement, gauze, local anesthetic,syringe,  scissors, toothed forceps, histology pot and vaseline

The procedure begins, with choosing the area to be biopsied. The area should contain the fresh lesion which could provide a diagnostic and clear histological feature of the lesions.
Skin marker is used to mark the area as the lesion ( red scaly lesion) may loss after rubbing the skin that is being blenched with adrenaline.  Skin marker is a marker for the lesion.

Alcohol swab is used to wipe the area of the lesion.

This is follow later with the introduction of the local anesthetics which is 1% lidocaine with adrenaline ( 1: 200 000) which is causing slight pain /sting in nature. These adrenaline containing anesthetic should not be used in areas which may occlude the end artery such as the penis, fingers or toe. This local anesthetic with adrenaline is injected beneath and around the site of biopsy with the aim to raise a bleb. the local anesthetic and adrenaline should enter the dermis and subcurtis. It is important to raise the bleb as it provides more spaces/depth between the surface and deep structure thus protecting the facial nerve or tendons on the dorsum of the hand.

Hand need to be washed and later the area around the biopsy sites need to be cleansed.

Vaseline is applied to the wound. If the sizes of the biopsy is 8 mm a buried subcuticular suture and surface suture are required which follow later with dressing or plaster.

The common complication of performing punch skin biopsy are:
Hemorrhage
infection
Scars ( keloid scar if biopsy is taken from a keloid prone area such as the neck or hypertrophic scar)