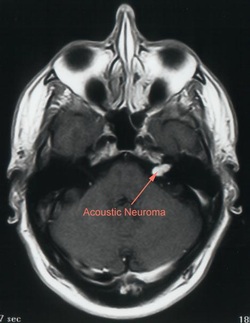 Schwannoma is a tumor which is benign in nature which arises from Schwann cells. Schwannoma may present with symptoms and signs such as headache, nausea, vomiting and seizures as well as raised intracranial pressure tinnitus, ipsilateral loss of hearing and vertigo due to compression of the cranial nerve VIII by the schwannoma.

Schwannoma is presented with two form of growth pattern which are known as Antoni A and Antoni B. Antoni A is a tightly packed elongated cells with palisading nuclei. Antoni B is loosely arranged cells and microcysts.