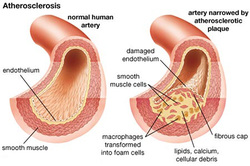 
Atherosclerosis mostly present in the medium or large muscular arteries as well as in the elastic arteries.

Atherosclerosis consists of fatty streaks which later progress into plaque which finally evolved into atheroma.Atheroma is covered by fibrous cap and consists of central core cholesterol and foam cells. There will be a lipid laden macrophages. The fatty streaks consist of lipid laden foam cell which accumulates at the tunica intima.

Atherosclerosis may be asymptomatic or present with symptoms and signs such as chest pain/angina or claudication as well as xanthoma which is a yellow patches/plaque or nodules on the skin.