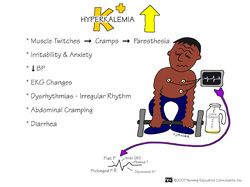 Hyperkalemia is an elevation of the level of potassium in the blood above 5.0 mmol/l. The first presentation of hyperkalemia is cardiac arrest with a potential of fatal arrhythmias. 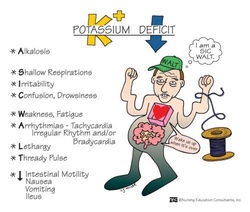 Hypokalemia is a reduction in potassium level in blood less than 3. 5 mmol/l. The symptoms and signs of hypokalemia are cardiac arrhythmias ( worse/serious arrhythmias that lead to sudden death due to low level of potassium), paralytic ileus ( always check serum potassium in prolonged ileus patient post- operatively ), constipation , myalgia and muscle weakness.

Hypokalemia may be due to excessive loss of potassium due to endocrine causes such as hyperaldosteronism /Conn’s syndrome ( patient complains of unexplained lethargy, muscle weakness and fatigue), steroid treatment and Cushing’s syndrome, gastrointestinal causes such as laxatives intake, fistula, villous adenoma, vomiting and diarrhea, and renal causes due to renal tubular disease and diuretics. Hypokalemia is also associated with inadequate loss due to reduce oral intake as a result of dysphagia or coma and potassium free intravenous fluid.