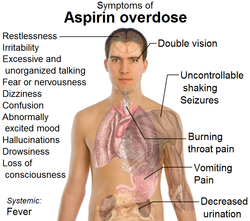 Salicylate/aspirin ingestion which is 10 -20 g  in adult or 3 g in children are considered lethal. Patient who suffer from salicylate poisoning may complain of confusion, tachypnea, tachycardia, deafness,fever and vomiting with pH of the urine > 6 and suffer from respiratory alkalosis. These are common features of mild poisoning.

Salicylate may lead to decrease in platelet aggregation. Salicylate stimulates prolongation of the prothrombin time and causing damage to the hepatocytes which lead to an increase in plasma enzyme level.

Salicylate will affect the metabolism of carbohydrates. This will lead to lactic acid , inorganic acids and ketones accumulation which further predisposing into metabolic acidosis with anion gap.

Respiratory alkalosis do occur as a result of hypocarbia and hyperpnea due to stimulation of the respiratory control center by salicylate. The kidneys will compensate respiratory alkalosis by excreted an increase amounts of potassium, sodium and bicarbonate while retaining chloride. This will further causing dehydration and in mild cases causing hypokalemia . Severe case is known to cause hyperkalemia. Hyperthermia is also associated with salicylate poisoning.

Gastric lavage is considered in this case. 1g/kg of activated charcoal is given and proceed by 25 g every 2 hours for 3 doses or 5 g every 4 hours for 2 doses. Glucose is needed as salicylate may decrease the level of glucose in the brain/central nervous system. Oxygen is also required. Establish IV lines and consider 0.9% of normal saline solution and potassium. Vitamin K is given. The purpose of vitamin K is to correct low level of prothrombin. If pH < 7.5, consider bicarbonate to correct acidosis. Forced alkaline diuresis may include IV infusion regime such as 500 ml D5%  and 500 ml of 8.4% of sodium hydrogen bicarbonate, 500 ml D5% and 1g of potassium chloride and 500 ml of normal saline with furosemide 40 mg. This procedure is repeated for 2/3 times . Urine output us monitored and aim for more than 4 ml/min. This procedure is only performed if the urine flow rate is 4 ml/min. If urine flow rate is less than 4 ml/min consider 20 - 40 mg of IV furosemide. Forced alkaline diuresis is abandoned if urine flow rate is still less than 4ml/min. Urine pH should be 7-8, if pH is less than 7.5 ( acidotic) , 1-2 mmol/kg of sodium hydrogen bicarbonate for 1- 2 hours are given. Fluid overload should be avoided as it may lead to cerebral edema and pulmonary edema.

The final stage include peritoneal dialysis, hemodialysis or hemoperfusion. These procedures are only performed if renal failure is developing, pulmonary edema, progressive deterioration of clinical status, plasma salicylate level more than 100 mg/dl and refractory or significant acidosis.