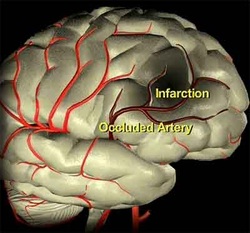 Non hemorrhagic infarction will occur through a few stages. Non hemorrhagic infarction is caused by thrombosis. During the first 12 hours, there will be eosinophilic cytoplasm and nuclear pyknosis due to the changes as a result of ischemic neuron. Two days later, infiltration of the microglia and monocytes will be prominent. This will lead to reactive astrocytes and fluid filled cavity or liquefactive necrosis by 3 weeks later. Several months later will be followed by formation of scar tissue known as gliosis.