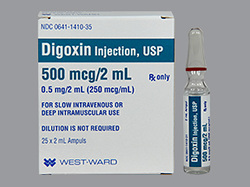 Digoxin may also increase in the parasympathetic outflow which later lead to a decrease in the heart rates. Digoxin will react at the sinoatrial node and atrioventricular node.

Digoxin may carry its own side effects such as cardiac arrhythmias, yellow blurry vision and gastrointestinal discomfort. Digoxin may cause changes on the ECG such as decreased in the QT interval, T wave inversion and prolongation of the PR interval as well as scooping of the ST segment.