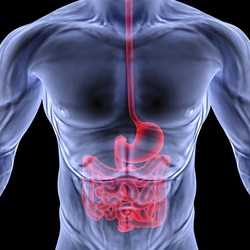 
The examination begins with general observation of the patient. Inspect for any evidence of jaundice, pallor or lethargy. Comment on the present of medication or apparatus around the patient such as vomiting bowl.

The examination begins with inspection of the hand. Focus on any evidence of clubbing. Fingers clubbing commonly occur due to primary biliary cirrhosis, cirrhosis, chronic liver disease and inflammatory bowel disease. Patient’s nail may be important in diagnosing few medical conditions. White nail or leuconychia occurs due to malabsorption of the nutrients. Hypoalbuminemia is associated with opacity of the nail bed. Spoon shaped nail / koilonychia is commonly due to iron deficiency anemia.

Patient may present with scratches due to itchiness/pruritus. Bruises along the arms are also common due to clotting abnormalities. Patient may also present with palmar erythema and warm, clammy hands. Radial pulse is palpated.Hepatic flap is a type of fine tremor in the fingers which is common in liver failure. Hepatic flap is differ from carbon dioxide retention flap which is more coarse in nature. Thickening and contraction of palmar fascia or Dupuytren Contraction may occur due to excessive intake of alcohol. There will be flexion of the ring finger.

Tachycardia is commonly due to infection/hypovolemia. Atrial fibrillation may lead to bowel ischemia due to emboli in the mesenteric ischemia.


Abdominal examination begins with inspection of the abdomeN. Observe for any evidence of abdominal distention. The common causes of abdominal distentions are fat, flatus, fluid, feces and fetus. Patient may present with stoma.  Stoma on the transverse colon is known as loop colostomy, right iliac fossa is known as ileostomy and stoma on the left iliac fossa is known as colostomy. There will be visible veins or known as caput medusa on the surface of the abdomen. Caput medusa is associated with obstruction of the inferior vena cava or due to portal hypertension. Striae may also present with due to obesity, Cushing syndrome or past and present pregnancy. There will be nodules bulging into the umbilicus due to metastasis of the cancer from the pelvis and the abdomen. This is known as sister Mary Joseph sign.

The patient’s abdomen need to be palpated. However, initially, the patient is asked if he/ she has any pain in the tummy. Palpate the abdomen from the region which is far from the sites of pain first before moving on and completing palpating nine regions of the abdomen. Observe the face of the patient and look for any signs of distress or pain while palpating the abdomen.

Pain / tenderness on the right hypochondrium is an indication of pneumonia, liver disease and galls stones. Pain / tenderness on the left hypochondrium is an indication of splenomegaly, colorectal carcinoma, tail of pancreatic carcinoma and carcinoma of the spleen. Umbilical region  tenderness is associated with abdominal aortic aneurysm, gastroenteritis and pancreatic body and tail carcinoma. Tenderness of the right flank region and left flank region are associated with renal stones, pyelonephritis and urinary tract infection. Pain / tenderness on the right iliac fossa is an indication of appendicits ( at the Mc Burney’s point 1/3rd of the way between the anterior superior iliac spine to the umbilicus, Crohn’s disease, ovarian cancer and caecum cancer. Left iliac fossa pain is mostly due to diverticulitis, colorectal carcinoma, ovarian cancer and constipation.

Ovarian pathology or ectopic pregnancy may also present with abdominal pain. In this case, pregnancy test is important.

The next step, to examine the liver. The liver is palpated by starting at the right iliac fossa. Hand need to be at the same angle as the ribs. Asked the patient to breath in and hold the breath while at the same time the doctor need to push the hand inwards and upwards. using the edge of the index finger to feel the edge of the liver. The finding needs to be described ( distance below the ribs, surface of the liver). Liver is dull on percussion.

The gallbladder can be palpated mostly in case of malignancy. The patient is asked to breath deeply and at the same time, the doctor will feel under the liver. Any pain is suggestive of positive Murphy’s sign due to acute cholecystitis. Courvoisier’s law indicates that the present of palpable gallbladder and jaundice is an indication of malignancy ( carcinoma of the head of the pancreas) not due to gallstones as gallstones may lead to fibrous tissue and scar tissue which shrink the gallbladder.

The spleen is palpated diagonally from the right iliac fossa. Remember to consider the following disorders such as portal hypertension, malaria, SLE and hemolytic anemia as the common causes of splenomegaly or enlargement of the spleen.

Kidney is palpated using the bimanual blotting. In this technique, one hand is placed around the patient’s back while another hand on the abdomen. The kidney is pushed forwards towards the abdomen. The surface and the sizes of the kidney are assessed. Patient may sometimes complain of tenderness( mostly due to pyelonephritis) on the renal region, in this case, the patient is asked to sit forward and the doctors/physician will softly thump the renal angles. Kidney enlargement is associated with polycystic kidney disease.
The bladder is palpated by palpating down the abdomen and try to coup the upper part of the bladder. The bladder is percuss from above to confirm the present of fluid ( dull in percussion. Bladder enlargement is associated with urinary retention.


There are two tests performed to confirm the present of ascites or fluid. The first is the thrill test. The patient’s hand is placed on the middle of the abdomen. The flank region in one side is flick while feel for thrill in the other sides. Mostly performed in case of abdominal distention. The next test is to perform the shifting dullness test. In this test, the centre of the abdomen is percuss towards the flank. Marked the point where the percussion sounds dull. The patient is later rolled on one sides. After 10 seconds continue to percuss again. The percussion note will be different from dull to resonance. This is due to the distribution of the fluid due to gravity.