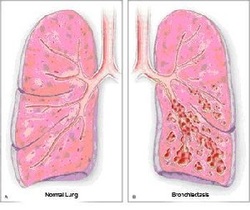 Bronchiectasis may present with hemoptysis, chronic cough and production of copious purulent sputum. Patient may appear anemic and cyanotic. On auscultation, crackles will be heard. There will be a decreased in the hematocrit level and decreased in in the ratio of the force expiratory volume in 1 second and force vital capacity. ( FEV1/FVC)

Bronchiectasis is associated with cystic fibrosis and obstruction of the bronchial by mucous, foreign bodies and tumor  as well as lung infection. Kartagener syndrome may present with collection of symptoms and signs which include situs inversus ( dextrocardia), sterility, bronchiectasis and recurrent cases of sinusitis.

Pathologically, the airway especially in the lower lobe is dilated with inflammation and fibrosis of the bronchial wall.The dilated airway is identified with CT scan with an additional of signet ring appearance.

The treatment of bronchiectasis may include bronchodilators and antibiotic as well as treatment of the underlying causes.